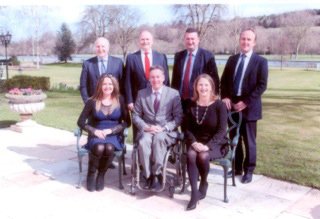 Frank has certainly set the bar in terms of speakers for future events. The guest on my table were enthralled and taken into a very different world through Frank’s incredible ability to communicate combined with his knowledge of world affairs, especially his Middle Eastern experiences. He kept us on the edge of our seats and engrossed, covering a range of topics and subjects, testament to the string of accolades he has received including European, Arabian and international journalist awards.

We all felt honoured to have Frank Gardner address the Thames Valley First Gala lunch and delighted with the overwhelming response he received at the event and through emails to us afterwards. Incredible, bright, astute and humble - all at once.

Frank Gardner was shot 6 times at close range while on assignment in Saudi Arabia in 2004, he was left severely wounded and is dependant on a wheelchair. Awarded an OBE by HM The Queen in 2005 for services to journalism, he is the author of 2 bestselling books ‘Blood and Sand’ describing his Middle East experiences and ‘Far Horizons’ describing unusual journeys to unusual places.